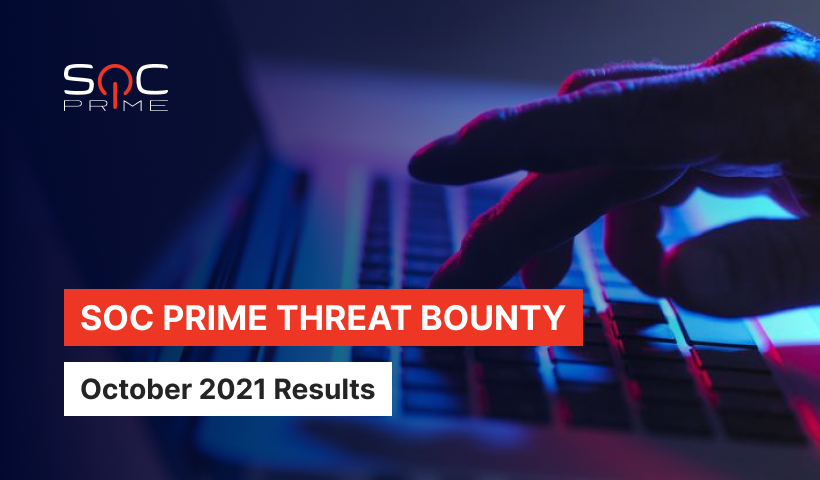 SOC Prime Threat Bounty Program provides enthusiastic cyber security defenders with the opportunity to share detections with the global community, and get publicly recognized and rewarded for their contributions.

Threat Bounty participants are motivated to share detections that can address security needs of 20K+ users. Thus, content authors gain each time their detection is consumed by clients via the SOC Prime Platform. No matter when a detection was published – this week or two years ago, it is only the highest quality of the rule that creates a demand for it by many clients.

Threat Bounty members who contributed the most actively:

SOC Prime pays recurrent rewards for content published in the SOC Prime Platform via Threat Bounty Program. In early November, we summarized all interactions comprising content rating that were made by SOC Prime clients during October. The average payout for previously active members is $755.

The client’s experience with Threat Bounty content via the SOC Prime Platform for November is being carefully analyzed to provide authors with detailed feedback on how to improve the detection content. As qualified content addressing the clients’ needs generates more interactions and brings increased value for the customer, the SOC Prime team will recognize all the ongoing content submissions and improvements made by Threat Bounty developers with doubled rewards for December 2021.

The rewards are based on content rating reflecting how SOC Prime users gain from the published content based on rules’ views and downloads by unique client interactions.

O365 – Create Hidden Mailbox Rule exclusive Sigma query by Sittikorn Sangrattanapitak is monitoring user behavior that may compromise Microsoft Exchange credentials. As one of the first steps after having obtained the credentials (most commonly through phishing), attackers created malicious inbox rules to copy ingoing and outgoing emails of their victim.

WinRM Remote Shell From Internet by Sittikorn detects network events that may indicate the use of WinRM Remote Shell from the Internet. WinRM is the name of both a Windows service and a protocol that allows a user to interact with a remote system. This port is used with CVE-2021-38647 mentioned in the CISA’s Binding Operational Directive (BOD) 22-01.

Explore the SOC Prime platform for collaborative cyber defense, threat hunting and discovery to boost threat detection capabilities and defend against attacks easier, faster and more efficiently. Want to join our crowdsourcing initiative to make the world a safer place? Get started with the industry-first Threat Bounty Program! 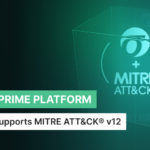 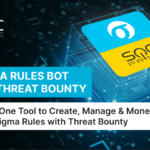 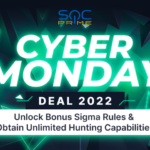 SOC Prime’s Cyber Monday Deal 2022: Get Bonus Sigma Rules of Your Choice & Unlimited Hunting Capabilities
This website uses cookies (small text files that are stored by the web browser on the user's device) to improve the user experience while you navigate through the website for the statistical analysis of traffic and to adapt the content of the website to your individual needs. It also lets us improve your overall experience of the website. These cookies will only be stored in your browser with your consent.
However, if you would like to, you can opt-out of these cookies in your browser settings at any time. But opting out of some of these cookies may have a negative impact on your viewing experience. More information can be found in our Cookie Policy, and for a detailed list of the cookies we use, see our Cookie Settings.
Accept and Close Cookie Settings
Array