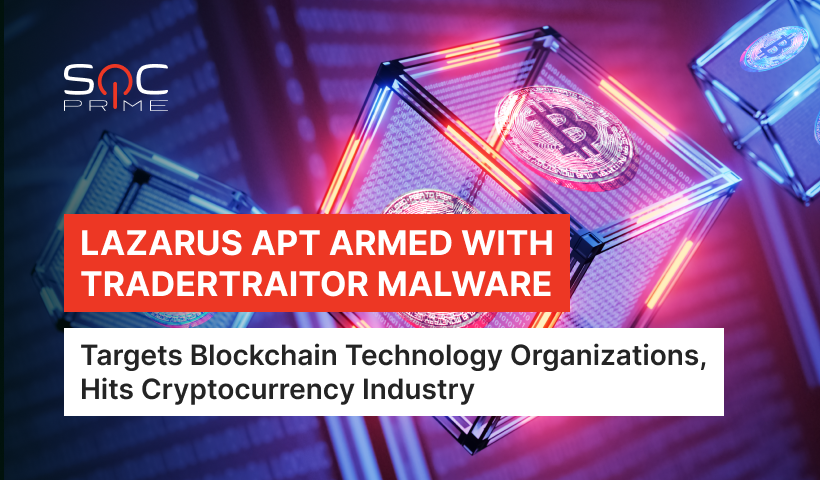 Cryptocurrency and blockchain businesses, such as trading, exchange, and investment-oriented companies, NFTs or crypto play-to-earn gaming businesses, as well as individual holders of cryptocurrency wallets and NFTs are all potential victims of the ongoing Lazarus APT activity centered around the distribution of TraderTraitor malware. Utilize the following rules released by our keen Threat Bounty developers Osman Demir and Sittikorn Sangrattanapitak to detect suspicious filenames and the associated user agent within your environment:

The detections are available for the 18 SIEM, EDR & XDR platforms, aligned with the latest MITRE ATT&CK® framework v.10. For more detection content, please press the View Detections button below.

The TraderTraitor malware is spread via spear-phishing scams – Lazarus’ time-tested modus operandi, as a part of APT’s multi-channel Operation Dream Job. TraderTraitor operators hit their targets with a large amount of spear-phishing messages through communication channels, including messaging and email platforms.

Once a target is tricked into downloading and installing these bogus tools for cryptocurrency operations, the system is infected with a tailor-made remote access trojan (RAT) that gathers system data, runs arbitrary commands, and enables adversaries to download additional payloads for fraudulent trades and theft of sensitive cryptocurrency data.

Smart and timely decisions for your organization’s cybersecurity strategy is a tried-and-true approach to withstanding large-scale APT strikes. Browse through Threat Detection Marketplace for more Sigma and YARA detection content to ensure no critical danger flies under the radar.