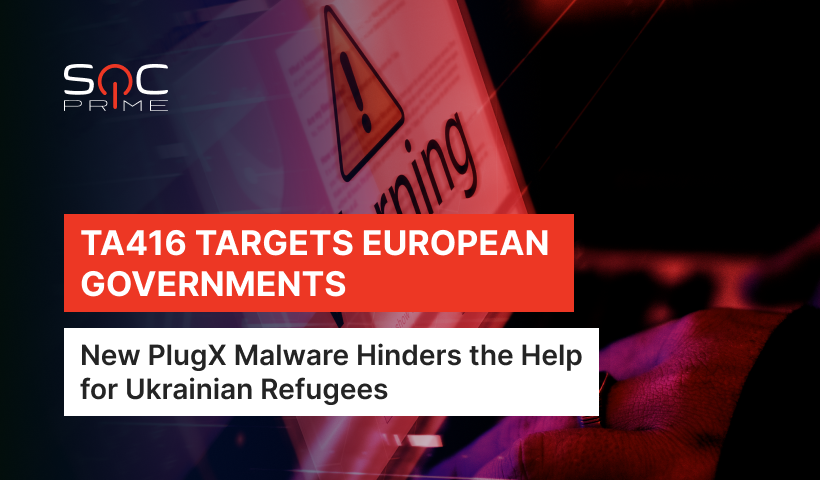 The research conducted by Proofpoint highlights that attackers utilize web bugs to deliver a variety of PlugX malware strains. The situation escalates due to the fact that TA416 actors have recently upgraded PlugX to a more sophisticated malware version by changing how it encodes and adding new configuration capabilities. Hence, old detection content for this malware might not be sufficient.

To proactively defend your infrastructure, discover the world’s largest pool of detection content in the SOC Prime’s Detection as Code platform connecting skilled cybersecurity researchers and proficient content developers from across the globe. Striving to become a content contributor yourself? Join our Threat Bounty Program to submit your detection content and have a chance to get recurring rewards for your work.

The most recent cyber-attack vector has been in line with the common adversary campaign of TA416/Red Delta APT collective they have been practicing since at least 2020. It all starts with phishing emails impersonating European diplomatic organizations. TA416 APT group has used SMTP2Go, a legitimate email marketing service, which allows them to alter the envelope sender field. Alternatively, TA416 threat actors also used compromised diplomats’ emails to deliver malware payloads to NATO officials at the end of February 2022, right after Russia invaded Ukraine.

A malicious URL embedded in an infected email initiates a download of an archive file with a malware dropper upon a click. This file, in turn, downloads four components:

Cybersecurity researchers mention that Chinese threat actors use a variety of versions of initial loaders, as well as final payloads, and different communication routines. That’s why there might be a wide variety of IOCs, whereas TTPs correlated to TA416 are not much different from the ones they’ve been leveraging since 2020, which makes TA416 campaigns easier to detect.

To evolve threat detection capabilities faster and more efficiently, individual organizations can tap into the power of collaborative cyber defense and enrich their expertise with the industry’s best practices. Join SOC Prime’s Detection as Code platform, the world’s largest and most advanced platform for collaborative cyber defense, to stay ahead of emerging threats and  empower your SOC operations.