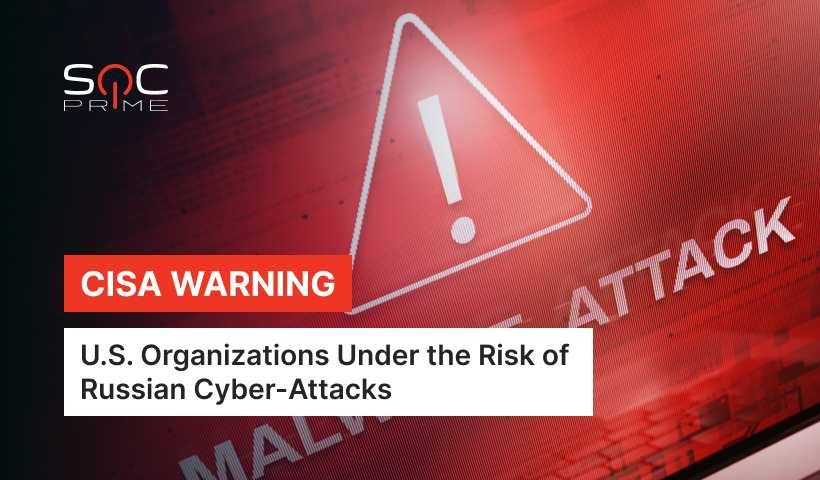 On February 16, 2022, Cybersecurity and Infrastructure Security Agency (CISA) disclosed the latest intelligence information about Russia-linked cyber-attacks on the US Cleared Defense Contractors (CDCs) that have been in operation for at least two years now. The targeted CDCs had access to a variety of sensitive data sources, including weapons development, surveillance data, communication lines, and software specifications. The known victims include the U.S. Army, U.S. Air Force, U.S. Navy, U.S. Space Force, and DoD and Intelligence programs.

The FBI, CISA, and NSA emphasize the importance of protecting Cleared Defense Contractor Networks against potential Russian cyber-attacks. We’ve gathered the latest detection content available in SOC Prime’s platform right now so you can ensure the timely mitigation of the abovementioned attacks in your organization.

According to CISA, the primary goal of Russian state-sponsored malicious cyber activity is to gain access to military plans and priorities of the US government. As a result, they can improve their own technological development efforts or even try to recruit the victims that they target.

The alleged persistent access to a multitude of CDC networks has been maintained since at least January 2020, with regular exfiltration of the sensitive data from documentation and emails. The commonly used Microsoft 365 suite of services has been the most frequent target. Adversaries mostly exploit the known vulnerabilities for leveraging credential harvesting, brute force attacks, and spear phishing. While the applied attackers’ TTPs are not uncommon, the alarming fact is that hackers use a wide variety of malware strains that can only be identified by continuously deploying the latest detection rules.

The US government agencies assume that state-sponsored threat actors from Russia will continue their intrusion attempts to target the Defense Contractor Networks in the nearest future. Therefore, it is advised that CDCs apply the most advanced cyber defense measures to withstand the possibly ongoing attack as well as future attempts.

To detect the malicious activity associated with the Russian state-sponsored actors and increase the awareness of potential threats, you can leverage curated detection content already available in SOC Prime’s platform. The table below (provided by CISA) lists common tactics, techniques, and procedures (TTPs) used by Russian nation-backed actors in the course of attacks against the US contractors and offers a batch of Sigma rules addressing adversary TTPs.

Join our SOC Prime’s Detection as Code platform right now and benefit from the worldwide collaboration of cybersecurity professionals to stay ahead of constantly emerging threats. If you’re a content developer, apply to join the SOC Prime Threat Bounty Program, submit your original Sigma and Yara rules, pass the quality check to get your content published via SOC Prime’s platform, and receive repeated payouts.