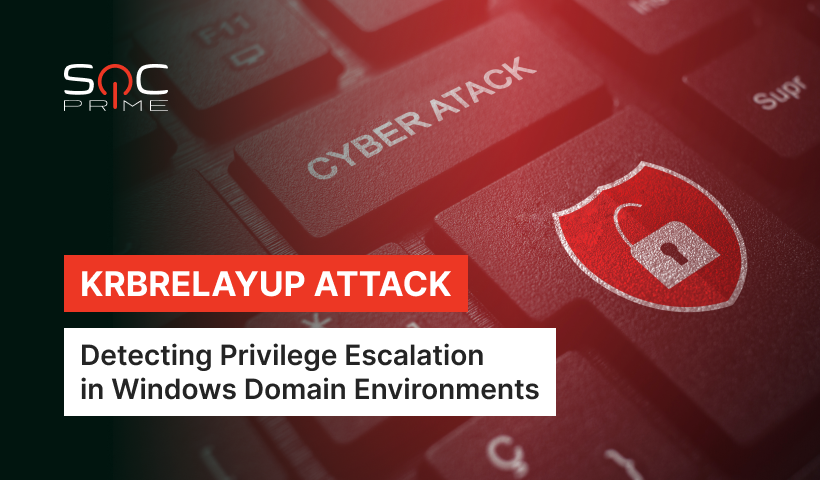 Cybersecurity researchers have revealed a security hole in the Microsoft’s Windows Active Directory (AD) allowing active users to add machines to the domain even without Admin privileges, which exposes to the machine to risk of privilege escalation attacks. According to the default settings, an AD user can add up to ten workstations to the domain.

Using the KrbRelayUp tool, a universal no-fix local privilege escalation in Windows Domain environments where LDAP signing is not enforced according to the default settings, an adversary simply needs to run code on a domain-joined host to perform an attack. Security researchers expect this flaw extensively leveraged by ransomware operators to proceed with infections as the exploitation rouitine is rather primitive.

The above-referenced detection is aligned with the MITRE ATT&CK® framework v.10 addressing the Defense Evasion and Credential Access tactics with the corresponding

The above-referenced detection is aligned with the MITRE ATT&CK® framework v.10 addressing the Defense Evasion and Lateral Movement tactics with the corresponding Use Alternate Authentication Material (T1550) and Remote Services (T1021) techniques.

Cybersecurity gurus eager to contribute to collaborative expertise join the forces of the SOC Prime Threat Bounty Program to help the worldwide community strengthen its cyber defense potential. Apply to join the Threat Bounty crowdsourcing initiative to contribute your detection content to SOC Prime’s Detection as Code platform and be able to monetize your input while adding to a safer cyber future.

The increasing attention to this potentially dangerous security issue again reminds of the risks of the ability of all Authenticated Users to join their devices to a domain. The dangers might be mitigated by changing the default setting and removing Authenticated users from the Default Domain Controllers Policy. Alternativelly, the new secure policy might be introduced to define the “Add workstation to domain” setting. More details on the KrbRelayUp vulnerability mitigation might be found in the most recent research by Mor Davidovich in his latest GitHub input.

A proactive cybersecurity strategy is a viable solution that progressive organizations are striving to implement to strengthen their cyber defense capabilties. Explore SOC Prime’s Detection as Code platform to gain access to curated, context-enriched threat detection content to ensure your organization is one step ahead of attackers.