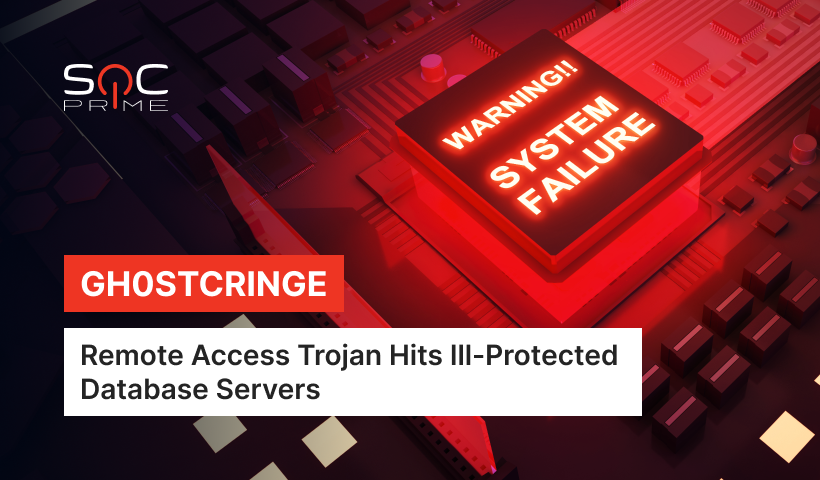 The Gh0stCringe, or CirenegRAT malware, based on the code of Gh0st RAT, is back, jeopardizing poorly protected Microsoft SQL and MySQL database servers. This remote access trojan (RAT) was first spotted in December 2018, and resurfaced in 2020 in China-linked cyber espionage attacks against governmental and corporate networks in the U.S. The novel malware is used against database servers with weak admin passwords.

For an efficient Gh0stCringe RAT detection, use the Sigma rule below developed by the talented member of SOC Prime Threat Bounty Program Sittikorn Sangrattanapitak, to timely track any suspicious reconnaissance activity in your system:

The rule is aligned with the latest MITRE ATT&CK® framework v.10, addressing the Initial Access tactic with Exploit Public-Facing Application (T1190) as the primary technique.

To detect other possible system compromises, see the full list of rules available in the Threat Detection Marketplace repository of the SOC Prime platform. Adepts at cybersecurity are more than welcome to join the Threat Bounty program to share curated Sigma rules with the community and get recurrent rewards.

Threat actors are reported to deploy the Gh0stCringe RAT that smoothly connects to the C2 server to accept custom commands or exfiltrate stolen data. In the most recent campaign, adversaries compromise database servers, using the mysqld.exe, mysqld-nt.exe, and sqlserver.exe processes to write the malicious ‘mcsql.exe’ executable to disk on breached systems.

To protect your organization from this or any upcoming cyber threat, register on the SOC Prime’s Detection as Code platform. Detect the latest threats within your security environment, improve log source and MITRE ATT&CK coverage, and defend against attacks easier, faster, and more efficiently.